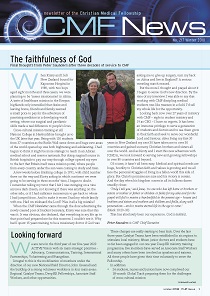 The faithfulness of God: final thoughts from Peter Saunders after three decades of service to CMF

When Kirsty and I left New Zealand bound for Kapsowar Hospital in 1989, with two boys aged eight months and three years, we were planning to be 'career missionaries' in Africa. A taste of healthcare mission in the Kenyan highlands only intensified that desire and leaving home, friends and family seemed a small price to pay for the adventure of practising medicine in a developing world setting, where our surgical and paediatric skills made a real difference to people's lives.

Cross-cultural mission training at All Nations College in Hertfordshire brought us to the UK later that year. Being with 130 students from 37 countries as the Berlin Wall came down and huge new areas of the world opened up was both frightening and exhilarating. I had begun to think it might be more strategic to teach in an African medical school and mentor nationals. But doing surgical locums in British hospitals to pay our way through college opened my eyes to the fact that Britain itself was a mission portal, where people from every country under the sun were coming to study and train.

A few weeks before finishing college in 1991, with child number three on the way and Kirsty asking in which continent we were going to be serving in three months' time, I began to doubt. I remember telling my tutor that I felt I was swinging on a vine across a dark chasm, not knowing if there was anything on the other side, or if I had sufficient momentum to get back to where I had jumped from. And to make it worse I had my whole family with me. Had we misheard the Lord? Was it all a big mistake?

When the CMF Newsletter came through the door advertising the newly created post of Student Secretary, Kirsty was sure that this was it. It was obvious, she declared, that everything in my life up to that point had prepared me for this moment. I couldn't see it. Why had I spent 15 years training to be a missionary doctor if God was asking me to give up surgery, turn my back on Africa and live in England? A serious wrestling match ensued.

But the more I thought and prayed about it I began to sense God's new direction. By the time of my interview I was able to say that working with CMF discipling medical students was like treasure in a field. I'd sell my whole life for the opportunity.

Looking back now over 27 years of ministry with CMF - eight in student ministry and 19 as CEO - I have no regrets. It has been an immense privilege to serve a generation of students and doctors and to see them grow in their faith and seek to serve our wonderful Lord and Saviour. After living my first 30 years in New Zealand my next 30 have taken me to over 50 countries and gained us many Christian brothers and sisters all over the world. And as Kirsty and I start this new adventure with ICMDA, we look forward to serving new and growing fellowships in over 80 countries and beyond.

Of course, it hasn't all been easy. Medical and spiritual needs are huge, hostility to Christian faith and values is growing and we all face the personal struggles of living in a fallen world this side of glory. But Christ's promises are sure and his victory is certain. And the day when his kingdom comes in all its fullness draws steadily closer.

'Truly I tell you,' said Jesus, 'no one who has left home or brothers or sisters or mother or father or children or fields for my sake and for the gospel will fail to receive a hundredfold in the present age - houses and brothers and sisters and mothers and children and fields, along with persecutions - and to receive eternal life in the age to come.'(Mark 10:29-30)

That has absolutely been our experience. God is faithful.

Dr Peter Saunders is a former general surgeon and Chief Executive CMF. He is now CEO of the International Christian Medical & Dental Association