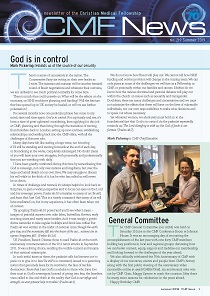 God is in control

Mark Pickering reminds us of the source of our security

There's a sense of uncertainty in the nation. The Conservative Party are voting on their new leader as I write. The summer and autumn will be another frenzied round of Brexit negotiations and whatever their outcome, we are unlikely to see much political normality for some time.

There is much that could unsettle us. What will be the effects on the economy, on NHS workforce planning and funding? Will the fracture that has opened up in UK society be healed, or will we see further polarisation?

For several months now, one particular phrase has come to my mind, time and time again: God is in control. For my family and me, it's been a time of great upheaval: considering, then applying for this job at CMF; planning and then living through the transition of moving from Yorkshire back to London; setting up new routines; establishing relationships; and settling back into the CMF office, with all the challenges of this new role.

Many days have felt like surfing a huge wave, not knowing if I'll still be standing and moving forwards at the end of each day, or floundering in the water, completely submerged. No doubt many of you will have your own struggles, both personally and professionally that you are wrestling with daily.

I have been greatly comforted during this time by remembering that God is sovereign, not only over nations and kingdoms, but over the large and small details of our own lives. We may struggle to discern his will while in the thick of it, but he who has called us will never let us down.

In times of challenge and turmoil, it's always helpful to look back at Scripture, to gain a wider perspective and to focus our eyes on the Lord and his sovereign power. Psalm 46:10 is familiar to many of us: 'Be still, and know that I am God.' This is a timely command that many of us will have meditated on, but in my experience, it has often been taken out of context.

Try googling 'Psalm 46:10 poster' and you'll see what I mean - images of peaceful sunsets over calm lakes, butterflies, flowers, early morning mists and many more besides. As if it was simply a gentle divine reminder to take regular holidays and drink less coffee! But Psalm 46 was written in the midst of national crisis: 'though the earth give way and the mountains fall into the heart of the sea... nations are in uproar, kingdoms fall'. (Psalm 46:2,6)

US President, Barack Obama chose to read Psalm 46 at the tenth anniversary commemoration of the 9/11 terror attacks in September 2011. It was a fitting choice, recalling the terrible turmoil and trauma of that national catastrophe.

In such awful times as these, the psalmist calls his listeners not to panic or to give in to fear. 'Be still' is a command, issued to a panicking nation that genuinely fears for its survival in the face of terrible destruction. 'Know that I am God' is a rebuke to those who have lost their trust in God's sovereignty. Instead of giving into fear, the Israelites were called to live and think in the reality that 'God is our refuge and strength, an ever-present help in trouble.' (Psalm 46:1)

We do not know how Brexit will play out. We cannot tell how NHS funding and service provision will change in the coming years. We can only guess at some of the challenges we will face as a Fellowship in CMF, or personally within our families and careers. Neither do we know how the various doctrinal and pastoral debates will play out within the church on issues such as sexuality and transgender. Doubtless, there are many challenges and uncertainties and we must not minimise the effects that these will have on the lives of vulnerable individuals, nor our own responsibilities to make wise decisions and to speak out where necessary.

Yet whatever we face, we absolutely must hold on to the foundational fact that God is in control. As the psalmist repeatedly reminds us, 'The Lord Almighty is with us; the God of Jacob is our fortress.'(Psalm 46:7)