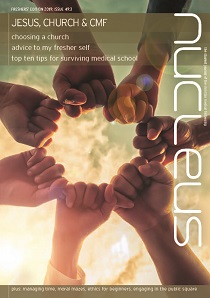 … who suffers from mental illness

In my second year, I became unwell with depression and anxiety. To the outside world I seemed fine, but I felt incredibly alone and ashamed. Despite treatment and support, things progressively worsened, and I was almost hospitalised two weeks before my end of year exams. It was an awful time as I began to believe the lie that if I was to 'rely on God more, I would not feel like this'.

This was not true! In the darkest times, when I felt unable to drag myself into another day, all I had to hold on to was that God would never let me go nor give up on me. Looking back, I can see that when I felt most alone God drew closer, even if I couldn't feel it. I decided, against advice, to sit my exams having not done much revision and fully expecting to resit. However, God was gracious, and I passed, proving to me once again that God is bigger than anything we face. Mental illness can be scary, isolating and difficult to explain, but you're not alone.

A third-year medical student at the University of Edinburgh

In my second year, I failed exams in both semesters. This was a combination of not enough preparation, and bad luck! It was very stressful. I asked God to give me the work ethic and motivation to keep studying so I could pass. I also asked him to keep me calm and unstressed when I could feel myself getting anxious and worried.

I know that God has a plan for me, I know he will help me to achieve it, and I also know it won't always be easy. From the moment I decided to do medicine, I knew that it was what God intended. However, I also knew that if I did completely mess up and fail, God would not leave me; he would either provide a way for me to continue with medicine or would show the other plans he had for my life. This confidence in his power and will has helped me through the stress, time and time again.

Through hard work, determination and faith in God, I managed to get through my resits and pass with decent marks. Failing exams is not the end of the world. You can come back from it; if God wants you to do something, he will help you get there, and God really will help carry your burdens, whether that's stress, worry or anything else.

A fourth-year medical student at the University of Manchester

Having spent my first two years in the library, my third year brought its own challenges. Waking up earlier, seeing patients all day, and the pressure of consultants challenging my medical knowledge, meant that by the end of the first semester my self-esteem had reached an all-time low and my interaction with my friends was suffering. I stopped doing the things I enjoyed and sleeping became a battle. After two weeks of failing to cope with it all, I reached the lowest point of my medical school journey: I thought about ending it all. I realised I needed help and to speak to someone before I got worse. I confided in my mother and sister, which was the best decision I made because they prayed with me, reminded me how proud they were of me and encouraged me to rediscover my passion for medicine. Although some of my assignments were affected, I can testify that God was faithful throughout and I am in a much better place thanks to the support and prayers of my friends and family.

A fourth-year medical student at the University of Leeds


… who is a failure in following Jesus

I viewed university as the time to step out as a Christian adult — becoming settled in a new church, striving to explain the gospel to non-Christian friends and learning to live all of life for him. In reality, I was scared and sinful and felt that the demands of following Jesus were just too high. In reading Mark's Gospel, I realised that I was frequently ashamed of Jesus' words; I preferred to look powerful rather than to serve and would rather not suffer for him. Mark's Gospel showed me that I wanted to keep my own life instead of obeying Jesus' commands. The only solution was to see Jesus' death on the cross as the ransom that I desperately need to follow him.