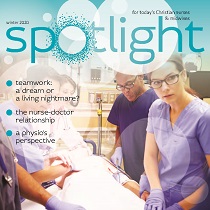 In a 2015 issue of the Nursing Times, chief nurses were called to help tackle 'shameful' bullying statistics. (1) One in four NHS staff is bullied. Retention of nurses is further hampered by nurses reporting that they feel frustrated and dissatisfied with working relationships that devalue their professional worth, especially that of the nurse-doctor relationship. (2)

The disciplines of nursing and medicine are expected to work in unusually close proximity to one another, not just practising side by side but interacting with one another to achieve a common good - the health and well-being of patients.

Collaboration, a relationship of interdependence, requires the recognition of complementary roles. Moreover, in a climate that can be demanding and stressful, doctor collaboration holds promise for improving patient care and creating more satisfying work roles. (3) Yet all too often, there is conflict and lack of collaboration between staff.

Historically, the nurse-doctor relationship has been characterised as essentially a subservient-dominant relationship. (4) Some doctors, especially older ones, still view nursing through this hierarchical lens and sadly treat nurses in a dismissive, belittling or intimidating manner. Unhelpfully, the entertainment media is a leading source of this 'handmaiden' imagery. (5)

Nursing and midwifery are autonomous professions. Nurses and midwives train, manage, and regulate themselves, with a unique focus and scope of practice, including special expertise. So when doctors show disrespect and don't listen to them, it is one of the major factors in nurses' dissatisfaction in their work.

Nurse-doctor relationships have improved in certain healthcare situations, such as the operating room and intensive care settings. However, many nurses report that the same negative issues between nurses and doctors (6) that have existed for years still persist. In light of this, educators need to address how medical and nursing training can better equip doctors and nurses to work compatibly.

However, it isn't just nurses who suffer from negative relationships at work. Recent studies (7) show that female doctors, especially juniors, are given less assistance and respect by female nurses. Here lies another potential area of witness for Christian nurses and midwives - to model good interdisciplinary collaboration with female doctors, without prejudice.

For many years — until the 1960s — fewer than ten per cent of British doctors were female. Then things changed. For the past four decades about 60 per cent of students selected for training in UK medical schools have been female. Now, 46 per cent of all practising doctors in the UK are women. (8) In the next decade, it is likely that the majority of the medical profession will be female.

What an opportunity we have as Christians to model good, respectful and loving teamwork.

Every interaction may leave lasting positive or negative impressions on those involved, or on those who witness a particular nurse-doctor interaction. We need to use the best knowledge and abilities of all our healthcare team members to model kingdom values and cohesive team relationships.

We should be intentional about working in a patient and loving way with one another, remembering Paul's instructions, to 'set an example...in speech, in conduct, in love, in faith and in purity' (1 Timothy 4:12).

It's important to outwork this in practice by avoiding gossip and speaking well of one another, something quite countercultural on most wards!

As Christian nurses and midwives, we primarily receive our self-worth from the Lord and know the value in what we do. This frees us to work without approval-seeking or competitiveness with other nurses and doctors, and in the way we deal with (and talk about) doctors. I know first-hand the difference it made to medical students and junior doctors when I and other staff nurses actively sought to help, orient, advise and assist them as they came fresh to work on our ward.

One doctor recently told me how she had experienced particularly good support and Christian encouragement from nurse colleagues on a geriatric ward she'd worked on as an FY2 (senior house officer or SHO) in London. She writes:

SHOs looked after the ward day and night so we got to know our patients and the regular staff pretty well. It was a lonely job and quite tiring being on over the weekend, and especially sad at night on the darkened ward when a patient died. Going to certify an expected death behind drawn curtains with a couple of the nurses, the charge nurse and I stood very quietly and shared some prayers for the dead man. It felt right for us all. We were recognising and sharing our own sadness, giving support to each other, giving thanks for a life and putting him in God's hands. I was so grateful to the charge nurse for his initiative.

Christian witness in the workplace is not just speaking the good news. We need reminding of Jesus' exhortations to us, 'Love one another.' (John 13:34)

My nursing colleagues used to be amazed at the love and trust that was immediately evident among Christians on the wards, whatever their professional title. They couldn't believe that sometimes we had only just met and hadn't known each other for years. This sort of relating, as loving brothers and sisters truly does reflect Father God in a powerful way.

So, as Christian nurses and midwives, let's try and model working in a climate of loving care, and mutual respect for God's glory. I leave you with a challenge from a friend of mine: 'As Christians, can you relate to each other so qualitatively differently that it brings the world running?'

6. Diamond D. Another look at the 'hospital hierarchy'. Are nurse-doctor relations truly that strained? The Advisory Board Company 19 March 2013 bit.ly/2ow4jZN [Accessed 18 November 2019]

7. Gjerberg E, Kjolsrod L. The doctor-nurse relationship: How easy is it to be a female doctor co-operating with a female nurse? Social Science Medicine 2001;52(2):189-202