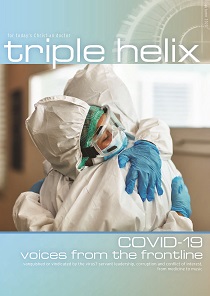 From Medicine to Music why change the key?

KEY POINTS
• Leaving medicine is a tough choice to make after investing years in training and professional development, but for some it is the right road to walk, especially when we have given our lives and careers to God.
• The author shares her struggles with the pressures and lack of resources in General Practice, and its impact on her own mental health.
• While not wanting to encourage people to leave the profession, the author is keen to encourage those feeling trapped and unhappy to realise that there may be other, God given opportunities to discover outside of medicine.

Roxanna Walker share how God walked with her on her journey from medicine to a new career.


After nearly 23 years as a doctor, I hung up my stethoscope and picked up my violin. Of course, I had been picking it up for many years, but now it has become my livelihood, rather than purely a hobby. Some people were shocked, while others, including many doctors, expressed genuine approval and understanding. So why would I give up a good career with a healthy income, a position of respect, and the sense of reward which comes from ministering to the sick and vulnerable? Looking back, I had always found medicine difficult. After studying in Nottingham, my pre-registration House Officer year (FY1) was one of the toughest in my life. However, I then went on to Accident and Emergency, where I began to develop some confidence. I spent six months working in Cameroon and then returned to Nottingham to train as a General Practitioner. After 18 months of locum work, I joined a partnership in 2002, and within a year, I realised that I wasn't happy or settled enough to 'buy-in' to the premises. I joined another partnership, and initially, I thought I had found my job for life. However, one year in, I developed my first depressive illness, which sadly led to my leaving the practice a year later.

God often works through difficult times, and the following year I was offered a post with CMF as Regional Staff Worker in the East Midlands. This was one of the best jobs of my life, where I had the opportunity to explore ethical and theological issues, to teach and to spend quality time with medical students and junior doctors. When that post came to an end, I joined a Nottingham practice as a Salaried GP. The following year I got married, and in 2011 my son Joel was born. Two years later, following another episode of depression and a difficult return to work, I took a break and worked as a locum, in order to spend more time with Joel.

Shortly before Joel started school, I joined a local practice, initially as a locum, and subsequently as a salaried GP. The practice was going through turbulent times, with all but one of the partners having retired within a short space of time. Soon after I arrived, the decision was made to go into partnership with a private company, who would take over the management of the practice.

Sadly, the stability promised by the company failed to materialise. Morale was low, and several staff left. Sometimes there was a four-week wait for a routine appointment with me. Consequently, when patients saw me, they needed far more than could be provided within a ten-minute appointment. There was always a long list of messages and phone calls, partly because patients could not get a timely appointment.

I began to wonder whether this lifestyle and work pattern was sustainable. I was already working part-time in order to stay healthy and to be present after school for my son. I adjusted my working day to manage the workload better. But I often went into work on my day off to catch up with administration, and however much time I put in, I never got on top of it. I was aware that I was bringing my stress home with me and that this was affecting my family as well as my own health. Although some of the issues were unique to my practice, much of what I have written will be familiar to GPs across the country. Many doctors work more hours than I was working, some with the added responsibility of partnership. I knew that it would not be difficult to get a job in another practice, but that many of the pressures would be the same wherever I worked.

For three years running, I experienced an episode of depression and anxiety, resulting in time off work. On the last occasion, this happened despite taking a maintenance dose of medication. To me, this was a warning sign that there was a more fundamental issue at stake. Both my husband and my mother were experiencing significant health problems, and I knew that I needed to look after myself if I was to support them adequately. I had often felt somewhat trapped in that I was highly skilled in one field, with no opportunity to move sideways into another area. But I started to think more creatively about my options. I met two people at church who were music teachers, both of whom had moved into music from other careers. I wondered whether this was something I would be able to do. I had a degree of proficiency in the piano and violin, experience with children, and teaching skills gained while working in medicine and for CMF. I started giving a small number of lessons informally and found that I enjoyed teaching and received positive feedback.

'Whatever you do, work at it with all your heart, as working for the Lord, not for human masters'. [1] Early in 2018, I heard a sermon which prompted me to consider what my motivation was for staying at the practice. I realised that most of my reasons were negative rather than positive - I didn't want to let down my patients or colleagues, but I was no longer working out of a keen desire to serve God, or for a love of the job.

Discerning God's will is often a tricky thing, and I cannot say that God 'told' me to leave medical practice. But I did have a sense that God was giving me 'permission' to move on. It is easy, as medics, to feel that our duty is to serve God within medicine for all our working lives. But this is not what we sign up to. As Christians, we decide to follow Jesus, as he called his first disciples, [2] wherever that might lead. He certainly calls us to make sacrifices for him, but he also calls us to look after our families. [3] He asks us to use our gifts, [4] but most of us have been given a range of gifts which we could use. Providing medical care is not the only gift or the highest calling.

Jesus said to his disciples, 'Come to me, all you who are weary and burdened, and I will give you rest... My yoke is easy, and my burden is light.' (Matthew 11:28) I have never found medical life easy or light, and yet Jesus calls us to live under grace, not under law. [5] For me, the opportunity to explore music teaching was a chance to step away from the burden of worry about my work, and the toll it was taking on my mental health. It was also a step of faith. I did not know whether I would find sufficient teaching work or whether I would have to locum to supplement my income. As the number of pupils increased, I could see that God was indeed opening this door for me.

We are also called to seek wisdom, 'For the Lord gives wisdom, and from his mouth come knowledge and understanding.' (Proverbs 2:6) Each of us is a unique individual, known and loved by God. We live in a society which is full of challenges, and many of us work in high-pressure environments. We need to take time to reflect on our situation and to understand our personalities, strengths and weaknesses. Are we in a job where we can thrive, using our gifts and giving of our best? Or are we in a place which is a less good match, where every day is a struggle? If this is the case, it is worth asking ourselves what the cause of the problem is. Are there parts of the job which are particularly stressful, and can anything be done to ease that stress? Can the balance or focus of the job be changed, so that we spend more time on the things which we are good at, and which we enjoy doing? Each person's situation is different, but there are always choices which can be made. I submitted my resignation, and a few weeks later, the decision was made to close the practice. By the time I left, three months later, I had been offered a post at a local primary school, teaching both piano and violin. Two years on, I now also have many private pupils. I am much happier, and I have not had another relapse of my illness.

In sharing my story, my intention is not to trigger a mass exodus from the medical profession! However, for anyone unhappy in their work, I would encourage them to think prayerfully about what the issues are, to seek God's wisdom and remember his grace. 'Take my yoke upon you and learn from me, for I am gentle and humble in heart, and you will find rest for your souls.' (Matthew 11:29)

Roxana Walker is a music teacher in the Midlands

KEY POINTS
• Leaving medicine is a tough choice to make after investing years in training and professional development, but for some it is the right road to walk, especially when we have given our lives and careers to God.
• The author shares her struggles with the pressures and lack of resources in General Practice, and its impact on her own mental health.
• While not wanting to encourage people to leave the profession, the author is keen to encourage those feeling trapped and unhappy to realise that there may be other, God given opportunities to discover outside of medicine.