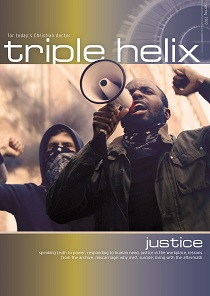 The CMF global advocacy group
KEY POINTS
Becky Macfarlane and Neil Merrylees explain how CMF has engaged with global health advocacy issues
We have all felt like this at times. There is no easy answer, but there is a theological and biblical basis for advocacy. There is a long tradition of speaking out for justice among Christians, as we explored in the last edition of Triple Helix. [1]

If we accept that advocacy for justice on behalf of the poor and oppressed has an important role in our faith, then what is the most effective way to go about it?

Over the last couple of years, CMF's Global Advocacy Group (GAG) has been grappling with this in relation to advocacy for global health. In this article, we highlight our work.

The group was formed in February 2020 as a short-term working group to consider how to support CMF members working in resource-poor settings worldwide to engage in advocacy for those they serve. We also looked at whether CMF has a direct role in global advocacy. After an initial meeting at the CMF office in London, we moved to online meetings during the pandemic. We consulted members working internationally about their priorities for the group to consider and how we could pray for them. We also sought advice from the Tearfund Advocacy team.

The group has been directly involved in facilitating CMF global advocacy on three issues:

The group wrote the CMF booklet The Advocacy Journey [2] as a resource to enable Christian healthcare professionals, particularly those working in resource-poor settings, to think further about our responsibilities and opportunities for advocacy and how to work practically with others to effect positive changes in global healthcare.

The work of this group has been, and continues to be, stimulating and challenging for those involved. Group members are aware that they have much to learn and are keen to receive feedback and ideas.

Neil Merrylees is a GP by training and Clinical Teacher in the Department of General Practice at Dundee University with a particular interest in Global Health.

Becky Macfarlane works as a speciality doctor in sexual and reproductive health in Glasgow with a background in general practice and a particular interest in the care of refugees. She is currently Chair of the CMF Global Advocacy Group.

The UK Government is putting £50 million into partnership with Unilever and NGOs [4] to fund handwashing and surface hygiene programmes to reach a billion people worldwide and provide over 20 million hygiene products in the developing world.
'Unlike in the UK, the weaknesses in health systems and limited access to health care in many developing countries mean that mechanical ventilators would benefit only a very small subset of patients.'

We expressed concerns about the merger of the FCO and DFID to form the FCDO; [5] that this might downgrade the focus on global health-related issues.

Regarding the initiative with Unilever, we believed that 'investment in smaller local companies using local knowledge and innovation would increase sustainability and help the local economy.'

Provision still needs to be increased for patients who develop respiratory difficulties. This could include oxygen concentrators and CPAP equipment which requires a lower level of training than full mechanical ventilation.

Worldwide, by August 2021, there had been more than 4.67 million deaths directly attributed to COVID-19 or its complications. The devastating economic impact has disproportionately affected the poor and vulnerable, thereby widening global inequalities. Nowhere has this been seen more starkly than in the distribution and administration of Covid vaccines across the world. As of August 2021 only 0.5 per cent of vaccines administered globally had been given in low- or middle-income countries such as in Africa and the Middle East.

If this inequity remains, then:

As of writing, no response has been received from the Prime Minister or Foreign Secretary.

The letter was also copied to Gordon Brown given his well-publicised efforts for vaccine equity. Mr Brown responded with a supportive email and some valuable information.

NHS England charges for immigrants with insecure immigration status, including refused asylum seekers. The group considered the impact of these charges on deterring vulnerable immigrants from accessing healthcare, including maternity care. This issue was also a seminar topic at the CMF RASH course. [6]

CMF Global signed a letter to the Home Secretary early in the COVID-19 pandemic regarding prioritising public health over 'hostile environment' immigration policies, including healthcare charging. [7]

GAG also produced a briefing [8] and suggested points for writing to MPs for CMF members to encourage individual advocacy on NHS charging. [9]

The group considered the impact of these charges on deterring vulnerable immigrants from accessing healthcare, including maternity care. This issue was also a seminar topic at the CMF Refugee and Asylum Seeker Health course. [6]

CMF Global signed a letter to the Home Secretary early in the COVID-19 pandemic regarding prioritising public health over 'hostile environment' immigration policies, including healthcare charging. [7]

GAG also produced a briefing 8 and suggested points for writing to MPs for CMF members to encourage individual advocacy on NHS charging. [9]

CMF's Global Advocacy Group has produced a resource on advocacy in global health called The Advocacy Journey, which is available from the Bookstore cmf.org.uk/bookstore