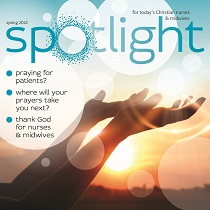 our eyes are on you

As winter has progressed, has it sometimes felt like you are part of an under-staffed and under-resourced team of nurses sent to face a vast army?
Well, if you have felt that pressure, you are not alone.

I have been encouraged recently by the account of Jehoshaphat, the king of Judah facing an overwhelming situation, to which his response is 'Our God…we have no power to face this vast army that is attacking us. We do not know what to do, but our eyes are on you'. (2 Chronicles 20:12)

This verse come at the end of a powerful prayer offered up by Jehoshaphat. The Bible records that once told of the mighty army coming against him, he was alarmed. However, note that this did not drive him to panic but rather he resolves to enquire of the Lord.


As Jehoshaphat prays, he calls to memory that he serves the mighty God of heaven, the ruler of all the nations. We can be encouraged that this is the same God we serve. He recalls God's faithfulness and expresses complete dependence on him. May this also be the posture of our hearts when work feels overwhelming and we do not know what to do, may our eyes be fixed on God and may we find strength from leaning on him.
God instructs them, 'Do not be afraid or discouraged because of this vast army. For the battle is not yours, but God's'. (2 Chronicles 20:15b)
In faith the king leads his men into battle singing praises to God. When they get there, they see that the Lord has indeed gone before them.
And he also goes before you. Hallelujah!
Question: In which situations does it feel like you're coming against a vast army?

Question: How can you use prayer and praise to be fixing your eyes on God in those situations this week?