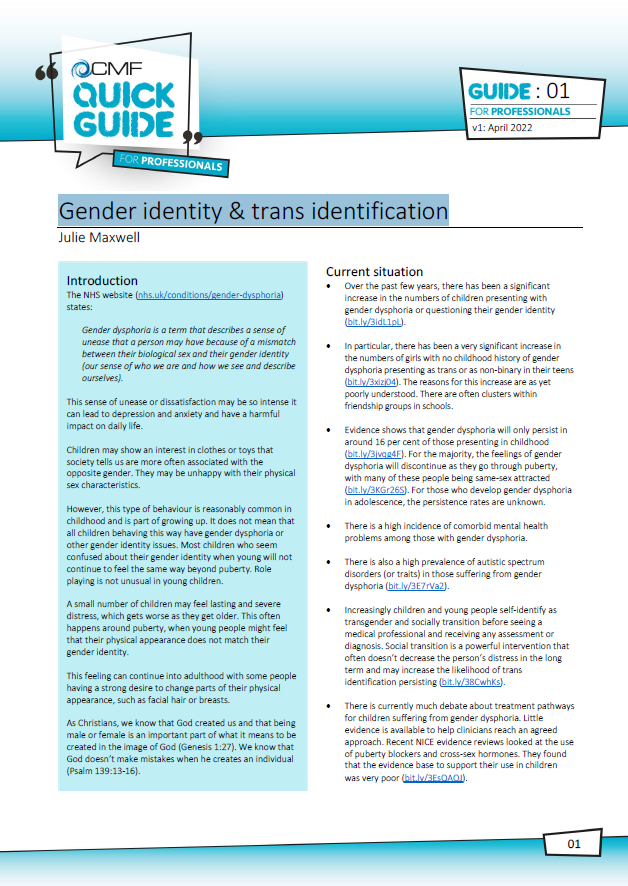 Trans identification is becoming increasingly common among young people. If your child is identifying as transgender or questioning their gender identity, it can be hard to know what to do or say and how to understand it biblically. We hope this will help.

Transgender - An umbrella term used to refer to a wide variety of experiences in which someone feels there is a disconnect or conflict between their biological sex (what their body says about whether they are a boy or a girl) and their gender identity (their internal sense of being a boy or a girl). Many other terms fall under this broad umbrella, including non-binary identities (identifying as neither a boy nor a girl) and fluid identities (feeling one's gendered identity is not static).
Gender Dysphoria - The medical diagnosis that will sometimes be made when someone experiences considerable distress because of their transgender experience.
Transition - The process of moving to live in line with one's internal gender identity. This can include social (eg name, pronouns, clothes), medical (eg hormones) and surgical (eg mastectomy, sex reassignment surgery) transition.
Transgender covers a vast range of experiences and understandings. It's important not to make assumptions but to ask your young person exactly what they are experiencing.

Over the past few years, there has been a large increase in the numbers of children presenting with gender dysphoria or questioning their gender identity. In particular, there has been a very significant increase in the numbers of teenage girls presenting as trans or as non-binary. The reasons for this increase are not yet fully understood. Clusters are often observed within friendship groups in schools.
Evidence shows that the vast majority of pre-teens who experience feelings of gender dysphoria will find those feelings fade over time, usually during or soon after puberty. The feelings only persist in around 16 per cent of those presenting in childhood (bit.ly/3rHrK0K). Research on desistence in cases of teenage-onset gender dysphoria is extremely limited, and greater understanding is needed.
Many people with gender dysphoria also experience a range of mental health problems (often preceding the gender dysphoria). People suffering from gender dysphoria are also more likely than the rest of the population to have autistic spectrum disorders or traits (bit.ly/3E7rVa2). There is currently much debate about how to treat children suffering from gender dysphoria and there is little good evidence available to help clinicians reach an agreed approach. Recent NICE reviews found there was very little evidence to support the use of puberty blockers and cross-sex hormones in children (bit.ly/3EsQAOJ).
Increasingly children and young people are self-identifying as transgender and socially transitioning before seeing a medical professional and receiving any assessment or diagnosis. It is not yet clear how social transition affects the progression of gender dysphoria.
Puberty blockers were introduced as a way to put a pause on puberty to hopefully reduce distress and allow time to assess a child and explore their difficulties properly. However, almost all children who go onto puberty blockers progress to cross-sex hormones. They do not, therefore, appear to be the reversible pause that was intended. This is particularly problematic because puberty itself often brings about resolution of the gender identity difficulties.
Puberty blockers and cross-sex hormones have several unwanted side effects, such as loss of fertility, loss of sexual function, reduced bone density, vaginal atrophy, and the need for hysterectomy (biological females), and lack of penile development (biological males). Some of these are irreversible, while others can make reassignment surgery more complicated if the young person chooses that pathway at a later date.
The issue of consent has been raised and is being debated in the courts. Medical treatment and surgical procedures for gender dysphoria in children are still experimental, and due to the effects on sexual function and fertility, there are big questions over a child's or young person's ability to meaningfully consent to a treatment with lifelong consequences, especially when in the midst of such distress.
Many people (especially parents) are understandably worried about the risk of self harm and suicide when their child is suffering from gender dysphoria. Some of this concern comes from statistics that are used to suggest disproportionately high rates amongst those with gender dysphoria; however, this is not borne out by evidence (bit.ly/3uBr8uC). Many of those with gender dysphoria have pre-existing mental health problems, which can be a risk factor for suicidality and should be addressed separately to questions of gender. There is also little evidence that medical intervention decreases the risks (bit.ly/3EaRzL9).
There are increasing numbers of people coming forward who are choosing to stop transitioning and live as their biological sex. Some regret the treatment they have been given, others don't but wish to return to living as their biological sex (bit.ly/3JAFyzx).

As Christians, we know that all people are created in the image of God (Genesis 1:27). We know that God doesn't make mistakes when he creates an individual as male or female (Psalm 139:13-16); we also know that we are all affected by the outcomes of the fall, including disease, disorder and distress.
It is incredibly hard to see your child suffering and to feel unable to help them. Here are some things you can do as you help them through this time:
Your young person may want to socially transition before committing to a medical route. Although this can seem like a workable compromise, it should be recognised that this is a powerful intervention which often doesn't decrease the person's distress in the long term, and may increase the likelihood of trans identification persisting (bit.ly/38CwhKs).
Consider whether some counselling may be appropriate - be sure to find a counsellor you feel happy with. Contact Bayswater Support Group (see resources below) if you don't know where to find one, and they may be able to point you in the right direction.

Please note that we do not necessarily endorse everything in all of these resources:


CMF Quick Guides to gender dysphoria and trans identification are also available for healthcare professionals, pastors and youth leaders. Find them at: cmf.li/QuickGuides

Julie Maxwell is a community paediatrician