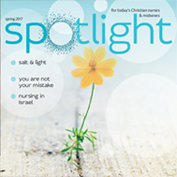 Pippa Peppiatt reflects on the small acts of a Scottish nurse

When we think of Christian nurses throughout history who have acted as 'salt and light' in the workplace, we may immediately think of some well-known examples. Nurses like Florence Nightingale whose moniker is the 'founder of modern nursing' as she fought to improve hospital conditions for the wounded soldiers in the Crimean war, and then helped professionalise nursing by establishing the first nursing school in London.

Or Dame Cicely Saunders who founded the modern hospice movement with an emphasis on holistic palliative care that recognised the spiritual needs of dying patients, their family and friends.

Yet the Bible's call for us to be salty doesn't imply a monumental act or achievement. We daily sprinkle salt in small measure on our food or add it to our cooking. It's a regular, measured and simple act that still transforms the taste of our food. In the same way, being salty as a Christian nurse may mean just a small and simple practical act, something we are prompted to do out of compassion that we scarcely give a second thought to, and yet may transform the care and experience of our patients. It may just be holding a patient's hand, a pause to ask or answer a question or a simple prayer in response to a heartfelt need.
Such was the small act of an unnamed (and largely unknown) nurse I've been reading about who has become my new nurse heroine. One simple act in a makeshift war hospital helped lead to the most recent revival in Britain.
What did she do that caused such an impact? She sang over her patient, a few lines of a Gaelic hymn, in her native language. A small 'salty' act, and yet how greatly God used it!
The year was 1918, and the patient was a young Scotsman called Duncan Campbell. He was part of one of the last major cavalry charges of the British Army in Amiens, France. In this battle his horse was shot from under him and he fell, severely wounded. Quickly a second charge was ordered and men of the Canadian Horse Artillery pressed in. As one Canadian's horse struck Duncan in the spine, he groaned aloud; that groan saved his life.
The Canadian heard it, returned to pick up the wounded Scotsman and took him to the Casualty Clearing Station. Campbell, though a Christian, 'had been appalled for months at the depravity of his own heart'. Now, thinking his end had come and that he wasn't in a fit state to meet his Lord, he cried out to God and felt the Holy Spirit coursing through him, bringing deep cleansing, a new spiritual power and a profound joy.
In this makeshift 'hospital' a highland nurse then came over to Duncan Campbell, and sang in Gaelic the beginning of a popular hymn. His biographer, Andrew Woolsey, in the book A Channel of Revival (1984) continues:
'Already in an ecstasy of joy, his heart bubbled over with praise to God. He began to quote, also in Gaelic, the 103rd Psalm. It is doubtful if any of the men around understood a word of the language he was speaking, but a stillness came over the ward and the awareness of God captured the consciousness of each one. Within minutes conviction of sin laid hold of them and at least seven Canadians trusted Christ.
The singing of the nurse and the praises of Duncan 'had so charged the atmosphere with the fear of God that these men were convinced of their sin and gloriously converted'.
We may think the small acts we perform for our patients are insignificant. We may feel too busy, pressured or even intimidated to do much. But God sees the small daily, often unseen, faithful acts of service and he can use them to great effect. If we are faithful in our love, our values and our work, if we remain sensitive to God's Spirit and any opportunities that he may bring our way, the impact could be far greater than we imagine.
That highland nurse could never have conceived the lasting result of singing a Gaelic hymn at that moment over her patient, Duncan Campbell. Duncan returned to the UK after the war and became an evangelist and preacher. He described his time on that ward as his personal revival, and from that time on 'he would just speak a word about Jesus and that would do it, people would be saved'.
He's best known for the role he played in the last revival the UK experienced. Between 1949 and 1953, under the preaching of Duncan Campbell, the majority of the population of the Outer Hebrides surrendered their lives to Christ. Empty churches were repopulated with young people, there were miraculous signs and wonders and the entire Hebridean society was transformed by the gospel.
I realise it's rather simplistic to credit the start of revival to any one individual or action. God is sovereign. There were probably many actions, and many people that contributed, including the faithful intercessions of two wonderful women in their eighties, housebound on the Isle of Lewis. But I think it's worth highlighting and remembering this unknown highland nurse's simple act of worship over her patient in a rough war hospital as being a special part of the incredible revival story.