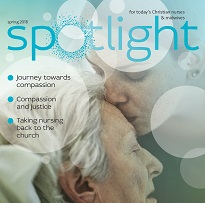 Taking nursing back to the church

What a busy day! Three refugee families have turned up at the church centre, this in the middle of the morning drop-in, needing advice on how to get appointments with the GP and how to fill in forms. Several mums with young children and elderly parishioners have come for advice and support - with several volunteers helping them while you work with the refugees. After lunch, the local drugs team are coming to open their regular drop-in for homeless drug users, so the morning drop-in must be over in time to set up. In the meantime, one of the older women who has just arrived, has broken down in tears, about one of her grandchildren who has been taken into hospital; you offer to pray and spend time with her, and she gratefully accepts.

Healthcare has not been part of the day-to-day ministry of most local churches in Britain for years, but the above fictionalised account of a morning in the life of a parish nurse shows some of the range of health-related ministry that more and more churches are undertaking.

Healthcare, and nursing in particular, are historically and theologically deeply rooted in the Christian church. (1) Spiritual and physical care have always gone hand-in-hand, recognising that Jesus healed both sickness of body and soul. (2)

In the third to sixth centuries, local churches ran ambulance and burial teams, taking the sick, dying and destitute to the growing number of Christian hospitals throughout the urban Roman Empire. In the Middle Ages, the monasteries became the centre of healthcare throughout Europe, and in the 19th century the Lutheran churches of Germany and Scandinavia required that all their deaconesses also be trained as nurses. Florence Nightingale was herself trained in one such Lutheran school in Kaiserswerth. (3)

However, the modern western secular world view is influenced by the Enlightenment and the separation of the spiritual from the physical. While churches still offer healing prayer and practical support, they have distanced themselves from any involvement in physical and mental health. Meanwhile, the place of Christianity in the NHS has diminished over the last 70 years. Until the 1950s, prayers were regularly part of the ward routine. Today, such an idea would be dismissed as totally inappropriate and unacceptable. Discussion of spiritual matters is limited to a referral to the chaplaincy team. Once a patient is discharged, however, the likelihood of continuing spiritual care decreases, especially for those who have no history of church involvement.

What is Parish Nursing?

Those involved in the NHS today are on the frontline of Kingdom activity and the local church should be recognising this and providing regular prayer support for them. But the church itself can have a more direct role in reaching out to address the spiritual gaps in modern healthcare.

In 80 churches, from all denominations across the UK, a new health ministry is developing based on biblical principles. Each ministry is led by a registered nurse, who is employed or appointed by the church as part of its ministry team. The nurse follows Nursing and Midwifery Council (NMC) guidelines and works with health providers. This is the most basic description of a ministry that originated in its contemporary form as 'Parish Nursing' in the Lutheran church in Chicago in 1986. Sometimes called 'Faith Community Nursing', it now operates in at least 25 countries around the world.

What do Parish Nurses do?

They help people of all faiths and none...

They do any or all of the above with an intentional focus on spiritual care, and may be assisted by a team of volunteers. Their patients know they are coming from the church and if so desired, they can have prayer and spiritual support in tune with their needs and preferences as well as other health interventions. It's a great way of churches being able to reach out to people in their moment of need, offering whole-person care, which includes spiritual matters.

Parish nurses seek to complement other health providers and build good relationships with GPs. They may help to reduce hospital readmissions, support carers, show people how to make better use of the health service, signpost other voluntary or statutory services, and provide time and hospitality. They also create a sense of belonging for people of all ages, faiths and none.

One parish nursing project in the north-west has been working with re-settled asylum seekers and refugees, helping network them into local services, providing health advocacy and advice (eg. attending appointments with them and (if needed) a translator to ensure their health needs are identified and responded to). Working with 30 families across the city, the parish nurse has become a vital part of the support team. They have also become a route through which the church can reach out to and support asylum seekers both practically and spiritually.

In another city, three parish nurses run a project in a city centre church, reaching out to the homeless and drug users. They help coordinate a drop-in centre twice a week that is attended by social services, addiction services, housing and homelessness services, etc. They are involved with ongoing outreach to, and support for individual homeless people and drug users. Often acting as advocates, they take people to appointments and connect them with other services. The strategic location of the church has made it a key part of the city's outreach services.

Making a difference to the mission of the church

A study of how parish nursing enhances local mission was completed in 2011. Some 15 parish nurse churches were compared with 77 similar churches without a parish nurse. The study showed the range of outreach in spiritual, physical, mental and community health was increased in churches with a parish nurse. More time was spent with people outside of the church; the number of volunteers trained and coordinated increased, and the profile of the church in the community was heightened. All 15 ministers agreed the mission of the church had been enhanced through parish nursing. Case stories told of people who had come to faith, returned to faith, or prayed for the first time. Some are now involved in volunteering themselves. (4)

The local church is re-engaging with health issues. Initiatives like Dementia Friendly Churches, (5) Anna Chaplaincy (spiritual care for people living with dementia), (6) Friendly Places (making churches more welcoming and supportive of people with mental health issues), (7) food banks, Street Pastors, (8) and the like, are all part of a re-engagement by the local church with the health and well-being of the wider community. Parish Nursing links in with these and other church initiatives, helping to bring the original health ministry of the Christian church, up-to-date. (9)

Parish nursing began in the mid-1980s in Chicago in the American Lutheran Church through the efforts of Rev Dr Granger Westberg, as a reinvention of the church nursing outreach done by religious orders, such as the 'Parish Deaconesses' in Europe and America in the 1800s.

It came to the UK in 2005 after Helen Wordsworth visited the Parish Nursing Symposium run by what is now known as the Westberg Institute. This body has developed a full curriculum of professional standards for Parish Nursing that is used worldwide - see westberginstitute.org for more details.

For more information on Parish Nursing in the UK email enquiries@parishnursing.org.uk for an enquiry pack.