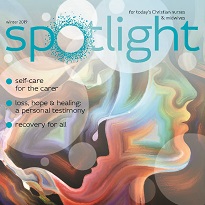 reflections on the Psalms with 'Alan'

Rachel Denno looks at the importance of caring for spiritual needs of patients with dementia, and at what we can learn spiritually from them

Recently, I have been reminded afresh that in unexpected environments and using unexpected teachers God reveals himself and his will to us.

Earlier this year, I was on a placement in an older persons' mental health unit on a secure ward for patients with acute presentation of organic disorders.This manifested itself as caring for many patients with dementia. Many patients were sexually disinhibited and struggled to control their aggression both physically and verbally, often becoming violent towards staff and other patients. On several occasions I left shifts with scratches, bruises and bite marks as well as offers of dates, and on more than one occasion, marriage. Often, working on this ward felt like entering an alternative reality; hilarious and tragic in equal measures.

Most patients would stay on the ward for at least two months, so it was nice to have some continuity with the patient group, something I had not experienced much of before. My previous placements had been in acute admissions where patient turnover was high. The ward provided an opportunity to really get to know the patients and their ways. I hesitate to write I was 'building up relationships with the patients', as the nature of the psychiatric conditions would somewhat necessitate a redefinition of the meaning of the phrase, due to the challenges patients with dementia have in forming new relationships. However, cognitive impairment and memory loss by no means discount meaningful interaction; furthermore there's value in repeated meaningful interactions over the course of time.

One patient, Alan had about 25 minutes of lucidity each afternoon, otherwise he would sit very still on his own with his eyes closed, mouth firmly shut and limbs rigid for most of the day. Occasionally, he would be more passively disengaged rather than this active state of isolation. At sundown, he would become agitated and distressed, slamming his body against windows and a door in an attempt to leave.

One evening as I was assisting him to bed, he opened his eyes and said 'Stop. Pray.'So I knelt down with him and he led me as we said the Lord's Prayer together. This is not a completely novel experience in older person's care; routines such as repeating set prayers are often comforting and habitual for many. After praying, Alan then began to hum a familiar tune so I sang along to 'Just As I Am.' The next day his wife visited so I shared with her what had happened, she smiled knowingly and told me she would bring in a Songs of Fellowship book. I soon learned that Alan's favourite song was 'Just As I Am', and despite a plethora of song choices provided by the Songs of Fellowship book, we nearly exclusively sang his one favourite.

Alan's wife seemed greatly reassured that there was a Christian involved in Alan's care. She commented that despite informing the nurses on admission that Alan was a practicing Christian, little spiritual support had been offered. In practice, I have generally noticed that despite being a routine part of admission paperwork in clinical settings, the 'religion' question is routinely omitted by nurses. If information has been provided, it is often overlooked. As a student nurse, I have frequently found going back to admission paperwork to check that the 'religion' box is completed is an effective way of starting conversations with patients and staff alike.

In her book, Dancing with Dementia, (1) Christine Bryden (an Australian civil servant who was diagnosed with Early Onset Alzheimer's when she was 46-years-old) writes about spirituality in dementia care. She stresses the role we have as healthcare professionals in guarding and encouraging our brothers and sisters in their faith within the context of memory loss. She writes:

'As I lose an identity in the world around me, which is so anxious to define me by what I do and say, rather than who I am, I can seek an identity by simply being me, a person created in the image of God. My spiritual self is reflected in the divine and given meaning as a transcendent being.

'As I travel towards a dissolution of my self, my personality, my very 'essence', my relationship with God needs increasing support from you, my other in the body of Christ. Don't abandon me at any stage, for the Holy Spirit connects us, it links our souls, our spirits - not our minds or brains. I need you to minister to me, to sing with me, pray with me, to be my memory for me.'

Initially, I (foolishly) was thankful to God for the opportunity to serve Alan and his wife in supporting him in his spiritual care, carrying his faith with him to encourage and remind him of his identity as an adopted child of God in the midst of an identity stealing disease. The thankfulness wasn't foolish, but my assumption of role as exclusively a caregiver and Alan as exclusively a care-receiver in our interactions was. 'Interaction' is a reciprocal action after all. I sought to capture Alan's lucid moments each day; spending time together reading, praying and singing. However, as time went on, I realised that in fact Alan was serving and encouraging me in my faith so much more than I felt I was doing so for him.

How marvellous that as we seek to minister to others, God uses those in our care to minister to us too! The first time I placed a blue Gideon's hospital Bible in front of Alan, he opened it and turned to Psalm 90. I smiled to myself as I was studying the book of Numbers at the time and had recently read Psalm 90, as this psalm is a prayer of Moses. As a 'man of God', Moses taught the Israelites how to pray and gave them words in this psalm to use to turn to God in prayer. The verse below highlights that in the light of eternity, our days on earth are neither insignificant nor desultory.

'Teach us to number our days, that we may gain a heart of wisdom. Relent, Lord! How long will it be?

Have compassion on your servants. Satisfy us in the morning with your unfailing love, that we may sing for joy and be glad all our days.' (2)

In God's sovereignty, our days are numbered; numbered in a beautiful, life-giving and meaningful divine order. Surrounded by the noise, carnage and confusion of the ward, where it seemed so easy to question God's purpose in preserving disorientated and distressed bodies, God used Alan to guide a re-orientation of my heart: he reminded me that all the days of someone's life are known to God.

I thank God that in the midst of confusion and upheaval, he is constant and unchanging. Despite facing an unknown future, Alan faithfully lived out Psalm 145, sharing his faith with another generation, enabling us to meditate on God's wonderful works together.

'Great is the LORD and most worthy of praise; his greatness no one can fathom. One generation commends your works to another; they will tell of your mighty acts. They speak of the glorious splendor of your majesty - and I will meditate on your wonderful works.' (3)

There are over 850,000 people living with dementia in the UK today.

One in three people born in the UK will develop some form of dementia in their lifetime.