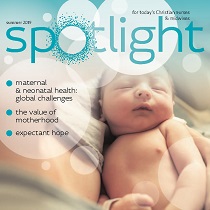 global challenges: improving the health of women and their babies

In most developed nations, pregnancy and childbirth are no longer widely considered hazardous for mother or infant in the way they were just a few generations ago. However, for the majority of the world's population this is not the case. Poverty, social attitudes and family structures, plus a lack of social, physical and medical infrastructure mean that for many millions of women, childbirth remains deeply hazardous. In Sierra Leone, nearly one in eight women will die in childbirth, compared to one in 33,000 in Finland. (1)

causes of maternal and neonatal mortality

Most maternal and newborn deaths happen around the time of birth, although complications during pregnancy (including malnutrition, infections during pregnancy, HIV, syphilis, malaria, anaemia, pre-eclampsia and chronic diseases eg. diabetes) can also threaten the health and survival of mother and child. In the UK and most developed nations, monitoring during pregnancy, labour and after birth, with timely medical intervention when necessary, has greatly reduced both maternal and newborn mortality. Where there is limited or no access to midwives, trained birth attendants or obstetric units in community or secondary care institutions, the risks to both mother and child soar. (2)

Lack of access to facilities occurs for manifold reasons. If a country as a whole is poor, then it will have few skilled professionals and dedicated maternity units, and those that there are will be so overstretched that the care they can offer will be limited. Even where better services are available, they are often too costly for poor families and too urban-centred and distant for rural families. If you have to travel 100 miles to your nearest clinic, let alone hospital, the costs of travel, hospital fees, paying for drugs and equipment and taking time away from earning a livelihood make it prohibitively expensive.

In addition, there are often pressures on women from the wider culture that limit their access to health services; for example, greater value may be placed on the health of men and boys than women and girls. Finally, the overall health of the population will have a significant impact. Where HIV, TB, malaria and other communicable diseases are endemic and where levels of nutrition are poor, the likelihood of mother and child suffering major ill health or of dying are significantly increased.

However, there are even more complex factors at work. In most societies, children are insurance for old age. They will care for, house, and financially support an elderly adult. The more offspring you have, the better the chance that one or two will survive to adulthood and be prosperous enough to care for you. So, there is pressure to have many children. As it is often the expectation that sons will care for their parents rather than daughters, the pressure is to have boys rather than girls. This can have worrying consequences. The more pregnancies a woman has in trying to acquire a male child, the greater the lifetime risks to her health and survival, and that of each subsequent child. (3)

The cultural bias towards male children is often exacerbated by other economic factors such as inheritance patterns for land and property going down the male line, and the social expectation that parents will pay a dowry to the husband of their daughter or to his parents. Besides economic and biological factors, there are also religious and cultural beliefs about such issues as ideal family size and the relative value of men over women. All of this affects how much will be spent to care for a mother in childbirth, how often she gets pregnant and the spacing between pregnancies.

Any solutions will need to address all of these economic, cultural and religious issues at some level, alongside improving access to timely, quality care from health professionals.

Research has shown that just providing good family planning services to help families control the number and frequency of pregnancies has little impact on either family size or the overall health and well-being of mother and children. (4) Smaller families are a disadvantage when a large family is your insurance policy for old age and sickness. However, when pensions and health insurance are provided, alongside family planning services, family size begins to drop. Family planning policies which encourage smaller family sizes through imposing limits or offering short-term economic incentives lead to a negative effect on the health and education of the children compared to those in larger families. This is because the parents are forced to divert funds from feeding and educating their children into saving for their old age. In other words, reducing family size (and the risks to the woman and each subsequent child of repeated pregnancies) can only be achieved as part of addressing wider economic and development issues. (5)

Another intervention that can have a significant impact is providing trained midwives and trained birth attendants (see page 5). Midwives do not just deliver healthy babies, they also ensure throughout the pregnancy that mother and child are healthy. A trained birth attendant can provide care during labour in settings where a midwife may be less readily available. Both midwife and birth attendant can ensure a mother is referred to an obstetric unit if there is a risk of complications. The United Nations Population Fund (UNFPA) estimates that there is a global shortfall of around 350,000 midwives, but by meeting this shortfall, up to 3,000 lives could be saved every day, with other health risks and challenges reduced for mother and baby. (6)

The local community also plays an important role. Neighbours, relatives, schools and other community networks all play a vital part in supporting expectant mothers. Very often at the heart of these networks is a church, mosque, temple or synagogue. In most developing countries, religion shapes the worldview and attitudes to health, women, childbirth, family size and gender balance. It is essential that any effective strategy to mobilise a community to support and care for pregnant women does so in the context of the religious environment in which the woman and her family live.

Christianity and maternal and neonatal health

Christian health initiatives have long advocated a holistic approach, recognising that all aspects of health are not just physical, psychological or social, but include spiritual, economic, cultural and political dimensions. Churches and Christian organisations have worked for centuries in improving maternal and newborn health, and continue to this day to be actively involved in providing such care. The Bible is not a textbook on healthcare, let alone a manual on how to care for pregnant women and their newborn children, but it does speak of a God who values human beings at all stages of life, whatever their gender, age or social class. Psalm 139 speaks of God knowing us in the womb, and having our lives opened out like a book before him, from conception to death. (7)

Women were held in high esteem by Jesus, who had many female followers. Jesus was unafraid to cross social boundaries in talking to unrelated women and women of other races, something no respectable male Jew of that time would ever have done. Furthermore, he did so with care and respect. (8)

Yet, we also know from Genesis 3:16 that the pain and suffering of childbirth are a consequence of the fall, and so childbirth became dangerous and painful. (9) Furthermore, we read 'your husband…will rule over you' (Genesis 3:16). This subjugation of women as part of the curse of the fall means the oppressive social attitudes that detrimentally affect the health of women, expectant mothers and their children are also a consequence of humanity's rejection of God. These hazards to women, both biological and social, are not part of the original pattern for humanity, but dimensions of our fallen nature.

Thankfully, the Bible is the story of God's salvation of humanity, restoring our eternal relationship with himself. Part of this story is the New Testament account of Mary, Jesus' mother and her cousin Elizabeth (see page 18), both unexpectedly pregnant and both carrying children who would shape the future of humanity. (10) The children recognise each other in the womb, and the mothers recognise that God is at work through their pregnancies. It is in the incarnation of God in the person of Jesus that the curse of Genesis 3 begins to be reversed; God experienced the everyday danger and frailty of life as a baby in the womb.

Ordinary women give birth to children all the time, and in entering into this most human of experiences, God dignified and made sacred the reality of childbirth, infancy and motherhood.

A Christian response to maternal and neonatal health is to see every life as sacred, known by God from the womb to the tomb, embedded in a network of human relationships, and worthy of the utmost care and respect. In cultures where women and children are not valued, we need to be countercultural, showing God's concern and love for every woman and newborn child in how we treat and afford them care and dignity. While childbirth remains hazardous and painful for many, we know that we have the human means to make it significantly less so. We have an obligation to ensure that no one is left without care that could save and enrich their lives.

Let's pray, let's advocate, and let's consider how we can use our skills and training to help at home and abroad.