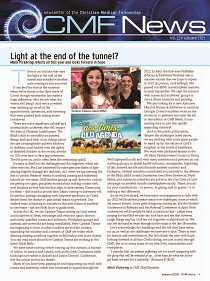 One of CMF's oldest and most widely celebrated members, Marjory Foyle, reaches her centenary on 3 November this year. In a long and busy life, she packed in several careers, but is most widely remembered for her work on stress and burnout among missionaries. Marjory spent over 30 years herself as a medical missionary in India and Nepal. Responding to huge needs, and partly as a result of circumstances in her own personal life, she specialised in psychiatry and became the director of a leading Christian psychiatric centre in India. Marjory was widely recognised as a worldwide expert on the nature of stress and how it affects Christians working in cross-cultural situations.

Her seminal work on the topic, Honourably Wounded, is still in print and available as an e-book. Her popular autobiography, Can it be me? was published by CMF in 2006 and is still available from the CMF Bookstore.

On behalf of the whole fellowship, we would like to wish Marjory a joyful 100th birthday, and pray God's continued blessings on her.