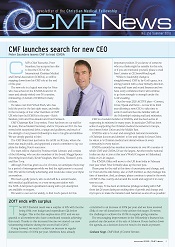 We can't remember a time in CMF when we faced more public policy challenges all at once. It's further evidence of the rapid secularisation of Britain and the escalating hostility to Christian faith and values.

The public policy team of Philippa Taylor, Rick Thomas, Steve Fouch and Peter Saunders have been busy handling media interviews, writing submissions to official consultations, preparing resources for members and working in partnership with other organisations to effect change.

Through the Care Not Killing Alliance, we have been involved in interventions in three major court cases on end-of-life issues. The Divisional Court judgement on 'Omid' (seeking to legalise assisted suicide) and the Supreme Court judgement on 'Y' (seeking to bypass the courts for decisions on removing feeding tubes from patients with persistent vegetative state (PVS) and minimally conscious state (MCS)) are still awaited.

However, the Conway Court of Appeal case (also on assisted suicide) delivered a fantastic judgement which left the law unchanged (see Triple Helix for more detail). An attempt to legalise assisted suicide and euthanasia on the island of Guernsey was also defeated when deputies voted 24 to14 against and 37 to 1 in favour of improving palliative care services.

The pressure to liberalise abortion laws throughout the British Isles is relentless. Aside from the campaigns to decriminalise abortion completely throughout Britain and stop prolife vigils and counselling outside abortion clinics plans are well underway to weaken the law in Ireland (by repealing the eighth Amendment) and Northern Ireland (through a Supreme Court case aimed at putting pressure on the currently defunct Stormont assembly to loosen the law).

There are also moves to introduce medical home abortions in Wales and Scotland and to roll out NIPT (non-invasive prenatal testing) which will effectively eliminate children with Down's syndrome before birth.

A new consultation aimed at allowing people to change gender legally simply on the basis of self-identification has just been launched for England and Wales and a similar one in Scotland is about to report.

Following the implementation of 'opt out' organ transplantation in Wales, a further consultation is asking how it should be rolled out in Scotland.

Meanwhile, a bill attempting to increase conscience protection for Christian doctors over abortion, end-of-life treatment and embryo research, appears to have run out of parliamentary time.

Please pray for staff and members involved in all of these debates and make use of our literature and especially the CMF Blogs to keep up with the latest developments and to be better informed and engaged.